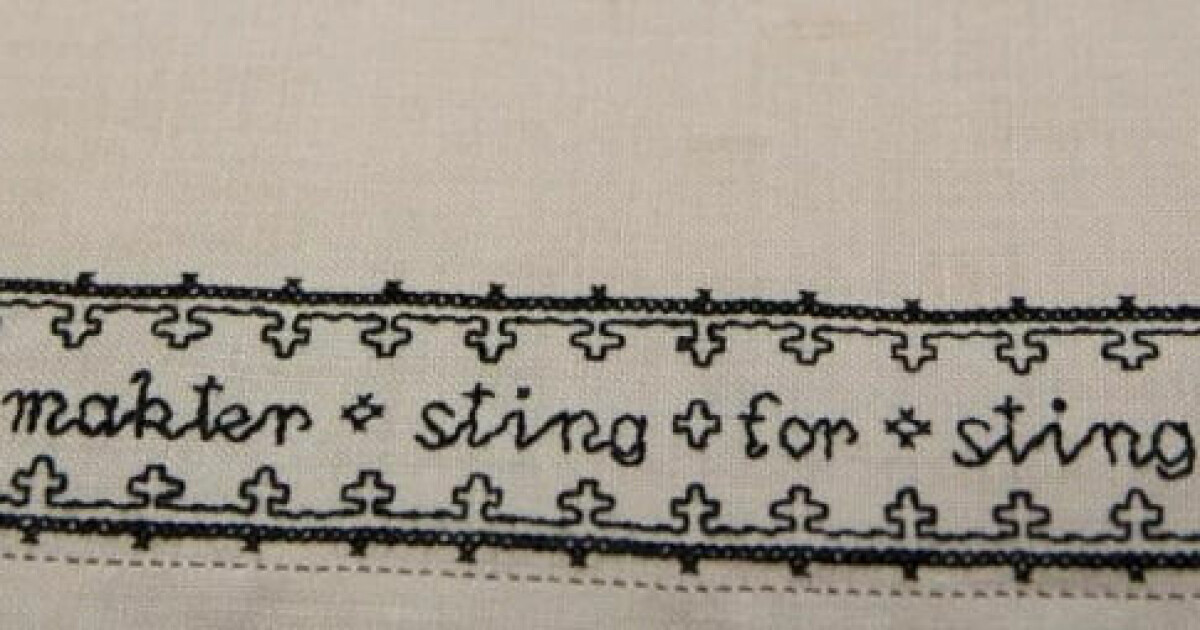 Is this Norway’s first guerrilla embroidery?

When war broke out in Norway in April 1940, Caroline Moe bought linen and black embroidery floss.

The teacher from Fjære near Grimstad in southeastern Norway resisted the German occupation in her own way. While she was working on it, the tablecloth looked perfectly normal.

This type of resistance had to be undertaken as innocently as possible, according to Lena Sannæs. She is a historian and collections manager at the ARKIVET Center for Peace and Human Rights in Kristiansand. ARKIVET is the only authentic WWII Gestapo headquarters in Norway.

Meanwhile, women took needlework with them when they went out for coffee with friends or to meetings of the Red Cross or the Norwegian Women’s Public Health Association. And there sat Caroline Moe with her crusade against war and for peace, even around the members of Nasjonal Samplingthe far-right Norwegian political party active from 1933 to 1945. The NS, as it is often called, was the only legal political party in Norway from 1942 to 1945.

“It was like giving them the middle finger. They didn’t know what she was doing,” Sannæs told sciencenorway.no.

Cross stitch against the occupation

Sannæs believes the tablecloth may be Norway’s first guerrilla embroidery, a form of rebellious cross-stitch embroidery. They became popular ten years ago, are often funny, but also political and critical, as Caroline Moe’s tablecloth was. Maybe she was ahead of her time.

In the border around the tablecloth it is written in neat stitching:

Against the dark forces, point by point is stabbed

A comforting belief in the day it will be used

As was intended for this fabric

People in the local community were aware of the project. When they asked how the tablecloth was doing, it was code for talking about the course of the war.

“The tablecloth was finished on Peace Day in 1945. And it was only used once. That’s when they celebrated Hitler’s death,” Sannæs said.

The fabric is part of ARKIVET’s WWII collections. Some believe the tablecloth is too small and does not show sufficient strength, Sannæs said.

“But it’s about maintaining your will to resist, and that of those around you. The tablecloth becomes a gathering object. You are defiant as you can be,” she said.

Many fled to the forests to join the resistance against the Germans, but daily resistance is also important, Sannæs said.

“If everyone who stayed at home didn’t resist at all, there would be no one left to fight for,” she said.

Women who disappeared from the history books

Jonassen went through the reading list of high school history books. Some of them don’t mention women at all, she says.

And when she found pictures and texts about women in these books, they were most often prisoners in concentration camps, housewives who provided food, or women who had fallen in love with German soldiers.

“The sum of it all seems to be that women played no role in World War II,” Jonassen said.

She described some examples of women who had made active efforts during the war.

Signe Viborg Andersen took over as leader of a Milorg group, after her husband was shot. Milorg was the name of the main Norwegian resistance movement. Andersen created an all-female communications section.

Margit Johnsen, also known as Malta-Margit, is one of Norway’s most decorated personalities – with medals from Norway, Malta and Great Britain. Johnsen was a sailor during the war and was torpedoed several times.

Dagny Sivlund was a supporter of the north. She joined the Soviet Union when the Germans arrived. She was first an interpreter, then she took a skydiving course and became Norway’s first female skydiver.

Anne Sofie Østvedt and Astrid Løken were secret agents. Both were part of the leadership group of XU, the largest intelligence group during the war, with 1,500 officers under them, according to Jonassen.

Equality — but given women’s tasks

“Norwegian women have been involved in all forms of resistance and acts of war, including sabotage and planning liquidations,” Jonassen said.

Often they join the resistance with a husband, brother, father or friend. The majority were single, young and working. Twenty percent were housewives.

The women who participated felt they were equal to the men in the resistance, according to Jonassen. But they were usually given feminine tasks, such as fetching food and delivering messages.

Especially at the beginning of the war, many women were spies.

“The Germans didn’t know that women were part of the resistance. That’s why they weren’t checked when they brought messages in strollers and on bicycles,” Jonassen said.

History books and encyclopedias often state that Milorg had 40,000 men at the end of the war.

“That’s not true, because 10% of those who participated in Milorg were women. Rather, we should say that Milorg was made up of 40,000 men and women,” Jonassen said.

World War II exhibits should include women, she said.

“But we have to work harder to find their stories,” Sannæs said.

As many women as men deliver objects and documents to museums, but it is often men’s business.

“People bring us the history of men. To put it bluntly: everyone delivers things from their father,” Sannæs said.

An exception is women’s letters and diaries.

“Here we can get a little closer and read these women’s own thoughts and experiences. And there the men are not as tough as they are portrayed in the movies,” Sannæs said.

Read the Norwegian version of this article on forskning.no

Our Treasures: A Stitch in Time Singer Toy Sewing Machine