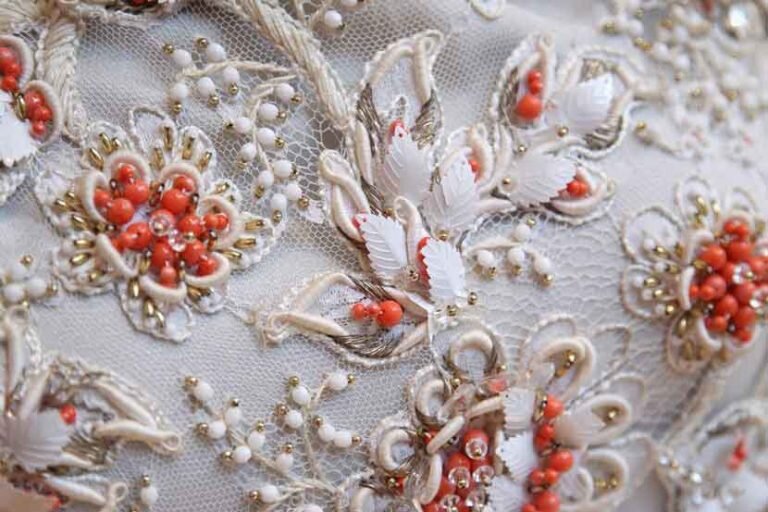 The know-how of this delicate craft has been passed down from generation to generation since Antiquity.

There are historical records and evidence that proves that this art was very popular during the Achaemenid and Sassanid eras. At the time, tents, carpets and clothing were adorned by the Monjughs, however, this was a custom specific to aristocrats.

Gradually, the material of making Monjugh changed from gems to glass and they became a craft practiced and used by common people.

According to Visit Iran, Monjugh-Duzi is the art of sewing Mojugh beads onto fabrics. The first step is to pass the beads through the thread using a needle and then sew them onto the fabric according to the pattern. There are many designs and patterns that can be applied to Monjugh-Duzi such as “Gol o Morgh” (flower and bird), “Gol o Buteh” (flower and bush), kinds of paisley, birds, animals, hunting grounds, geometric, trees, cypresses, arabesques, “Toranji” and “Sar Toranji”, “Sar Lachaki”, “Shamsehee”, “Bazubandi”, “Band Rumi”, “Shah Abbasi”, knots, Kelim patterns , holy names, etc.

Monjughs are most often sewn onto thick silk, satin and other shiny fabrics of various colors, and in styles such as “Khati” or linear, “Tupor” where the pattern is filled in by Monjugh, “Bast -Duzi”, “Cobareh-Duzi” and “Barjesteh-Duzi” or embossed. Sometimes it is used with other embroideries like “Gheytan-Duzi” which is done with thick thread, or with silk thread, sequins, beads and filigree.

Small beads being sewn onto clothes and other textiles, Monjughs became very popular in the late 20th century during the Qajar era. Some of Monjugh-Duzi’s valuable and elaborate pieces from this era are kept in the Museum of Decorative Arts of Iran and can be visited.