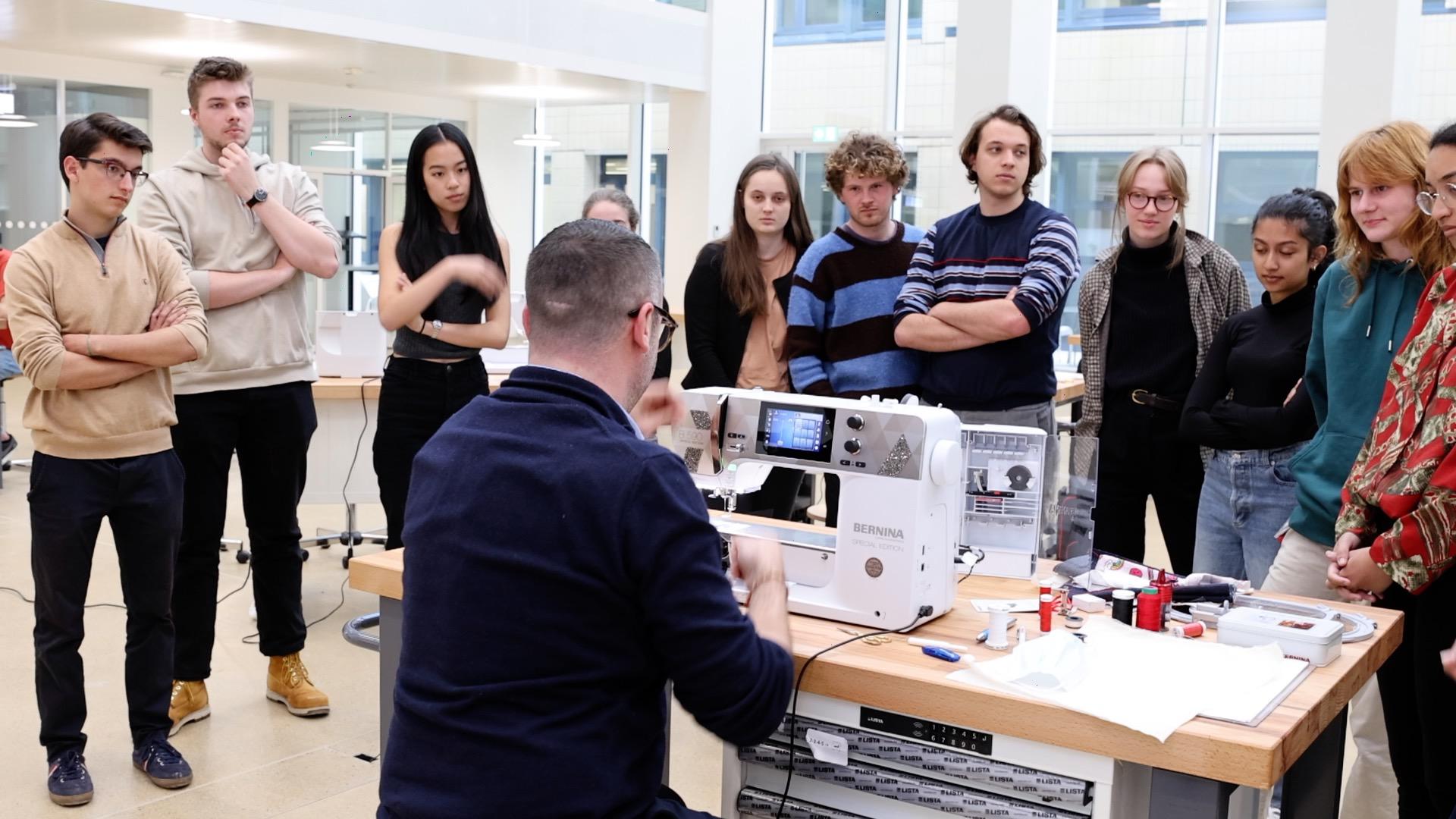 BERNINA Design Challenge: The sewing machine is an engineering marvel

In February this year, special contraptions were set up in the main space of EPFL’s Student Prototyping and Outreach Tank (SPOT), as five groups of students set out to learn how to use Bernina sewing machines. and run the versatile software developed by the famous Swiss manufacturer. . Their goal was to examine how machines could be improved or used in unconventional ways. Gonzalo Rodriguez, an exchange student, was immediately seduced by the challenge: “I signed up for the project because I wanted to gain experience by working directly with a company and better understand how the business world works and make joint R&D with universities.

The approximately 200 Bachelor (BA6) students can choose from several concurrent engineering courses. That of Prof. Pedro Reis, who heads EPFL’s Flexible Structures Laboratory (fleXLab), provided a ready-made framework for this first collaboration between Bernina and EPFL. Professor Reis studies the properties of unconventional materials and their potential in a range of engineering applications, and each year gives students in his class the opportunity to try their hand at something new. “The idea behind the class is for students to navigate unfamiliar situations, find new ideas and develop their concepts,” he says.

After a basic introduction to sewing machines, the students got straight to work, developing a prototype from scratch by the end of the semester. “Our only instruction was to improve the machine,” explains exchange student Maria Pociello Pinazo, who is studying industrial engineering. “Otherwise, we were given carte blanche. It was quite a disconcerting experience. At first our group groped in the dark. But we knew we wanted to do something to help minorities. Eventually they settled on the idea of ​​printing text in Braille, which meant programming the machine and making sure they had the right vocabulary. “We weren’t sure our translations were accurate, so we contacted the Swiss Federation of the Blind and Visually Impaired to get feedback on our samples,” says Aunosua Dey, an exchange student from Canada. “These discussions allowed us to see which elements were readable and where there were still problems.”

Students were given the freedom to use their imaginations, although they were able to call on a group of assistants for support and guidance. “We didn’t tell them what to do,” explains Bastien Aymon, one of the assistants who took part in the project. “They could work on something purely mechanical or take a more creative approach. Before the start of the semester, we discussed what we wanted to improve as students. Our thoughts naturally turned to R&D issues, such as the development of a theoretical model to determine the optimal thread tension for a sewing machine, which is a major technical challenge for Bernina. At present, there is no robust model that applies to all types and thicknesses of fabric.

But the students had other ideas, choosing to work on new concepts such as smart bandages, magnetic clothing, structured gloves for people with disabilities and a Bernina-led initiative to use sewing machines to teach children mechanics and coding in a safe environment. -proper manner.

Three students – Guillaume, Gonzalo and Élodie – worked on an educational and safe project. They developed a sensor that can stop a sewing machine if a child’s fingers get too close to the needle, as well as a laser that shows exactly where to puncture the fabric. “When choosing my Bachelor’s project, I was attracted by the Bernina Design Challenge”, says Guillaume John. “It was an opportunity to discover an interesting and different approach to engineering by working throughout the design process, from plan to prototype.”

According to Pascal Vuilliomenet, who directs the Discovery Learning Laboratories (DLL) program at EPFL, the research carried out at the fleXLab opens the way to the use of hitherto underexploited materials that could replace aluminum, wood and composites so widely used in structures today. “Textile mechanics is a fascinating area of ​​engineering, although courses in this area are rare,” he says. “But textiles have an important role to play. Working with Bernina is an opportunity to push the boundaries even further.

Peter Frederiksen “draws with a sewing machine” to create beautiful…

Our Treasures: A Stitch in Time Singer Toy Sewing Machine

Best sewing machine UK 2022 – for beginners and every budget