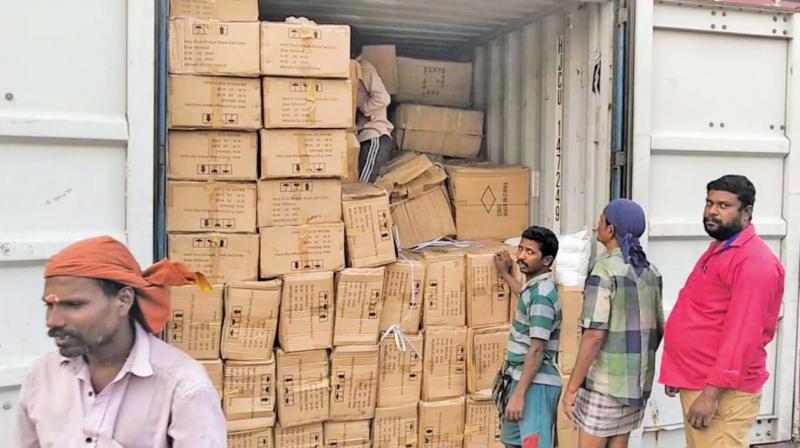 Chennai: Eight were arrested for smuggling sewing machine needles from China, evading customs duties by preventive customs officers in Chennai on Wednesday. The smugglers were arrested for the offenses of false declaration and concealment of goods, they said.

The agents were informed by a specific piece of information, of the important importation of needles subject to an anti-dumping duty. Officers conducted a search based on information from a freight company and intercepted a container claimed to contain “a shirt pin, a sealed rope for clothes”, “Christmas decoration lights” and more. Upon examination, sewing machine needles were found concealed in the shipment with the declared items. Officers seized 2.87 crore of needles with a total value of 3.84 crore, according to a statement.

Anti-dumping duties are imposed on certain items from specific exporting countries to bring the price of the item closer to the price in the country of origin. This program was introduced to protect the local trade from unfair competition from exported items that are dumped in the markets at a very low price. In the case of needles, the government had imposed an anti-dumping duty of £1.54 per needle (154,732 per lakh of needles) in addition to the normal duty of 21.24%. This was notified in Aad Notification 31/2017 dated June 22, 2017. After investigation, the importer of the needles was identified as M/s SLV Trading Company owned by an importer based in Chennai. The consignment was seized for misdeclaration and for importation without proper customs duty under the provisions of the Customs Act 1962.

IEC holder SLVijay and Mahaveer Kumar Jain have been arrested for their alleged role in smuggling sewing machine needles. Later, the seized containers that had been placed in the custody of M/s Thirurani Logistics are said to have disappeared. According to sources, the containers were removed illegally by providing false documents. Officers were notified of the removal of the containers and immediate tracking searchers were put in place to find the stolen containers. The goods were then recovered from the general warehouse of NK Logistics and the container from a landfill. Uka Ram behind the withdrawal of goods from CFS was also arrested by customs.