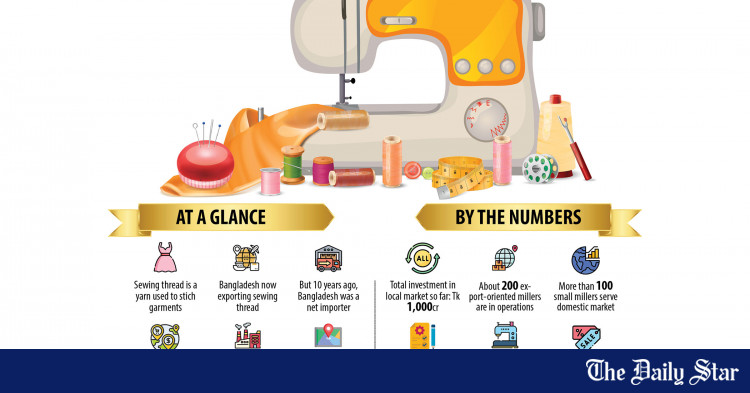 Hundreds of sewing thread manufacturing units have sprung up in Bangladesh in recent years, enabling the country to achieve near self-sufficiency in the main clothing accessory.

As a result, garment manufacturers were able to reduce their overreliance on imported raw materials and maintain strict lead times.

For all the latest news, follow the Daily Star’s Google News channel.

Sewing thread is mainly used for sewing clothes. And 10 years ago, local garment manufacturers and exporters were entirely dependent on imported sewing thread.

But now some of the major producers are even exporting the accessory after satisfying the local demand.

Currently, 20 local and multinational sewing thread factories produce more than 100 tons of this item per day.

Although sewing thread’s contribution is less than 1% of total apparel exports of $36 billion, it is vital for the manufacture of a finished garment.

Over the past decade, the sewing thread industry has witnessed an investment worth Tk 1,000 crore, according to industrialists.

“We are responding to growing demand in domestic and international markets,” said Syed Nurul Islam, chairman of Well Group, the company that owns the textile business.

“Leather sewing thread has a very bright future in Bangladesh as the leather and leather goods industries are very successful,” he said.

Sanzi Textile Mills’ market share in the sewing thread segment is 30%, earning $20 million annually. It also ships over $6 million worth of accessories a year.

Previously, garment manufacturers depended on China and Hong Kong for sewing thread. Now, local manufacturers can supply 95% of the accessory, while the rest is imported due to special requirements from international retailers and brands.

DBL Group, a garment exporter, invested Tk 200 crore in 2016 to establish Eco Threads & Yarns to manufacture quality sewing thread. It produces 10 tons of sewing thread per day at its Kashimpur factory in Gazipur.

The company consumes 20% and the remaining 80% is sold to other garment manufacturers, said MA Jabbar, the group’s chief executive.

The DBL group is considering expansion in the segment.

“I plan to set up a unit to produce sewing thread in Vietnam within two to three years, as buyers name our thread for their products because of its superior quality,” Jabbar said.

Although the country has become self-sufficient in sewing thread, the associated raw materials have to be imported, according to Abdul Kader Khan, general manager of Khan Accessories and Packaging Ltd.

He invested Tk 7 crore to establish a sewing thread unit in Tongi a few years ago to produce 70 tons of thread per month.

Local manufacturers can supply more than 90% of cotton sewing thread. But in the case of synthetic yarn, they can supply 70% of the demand, and the remaining 30% comes from imports, mainly from China.