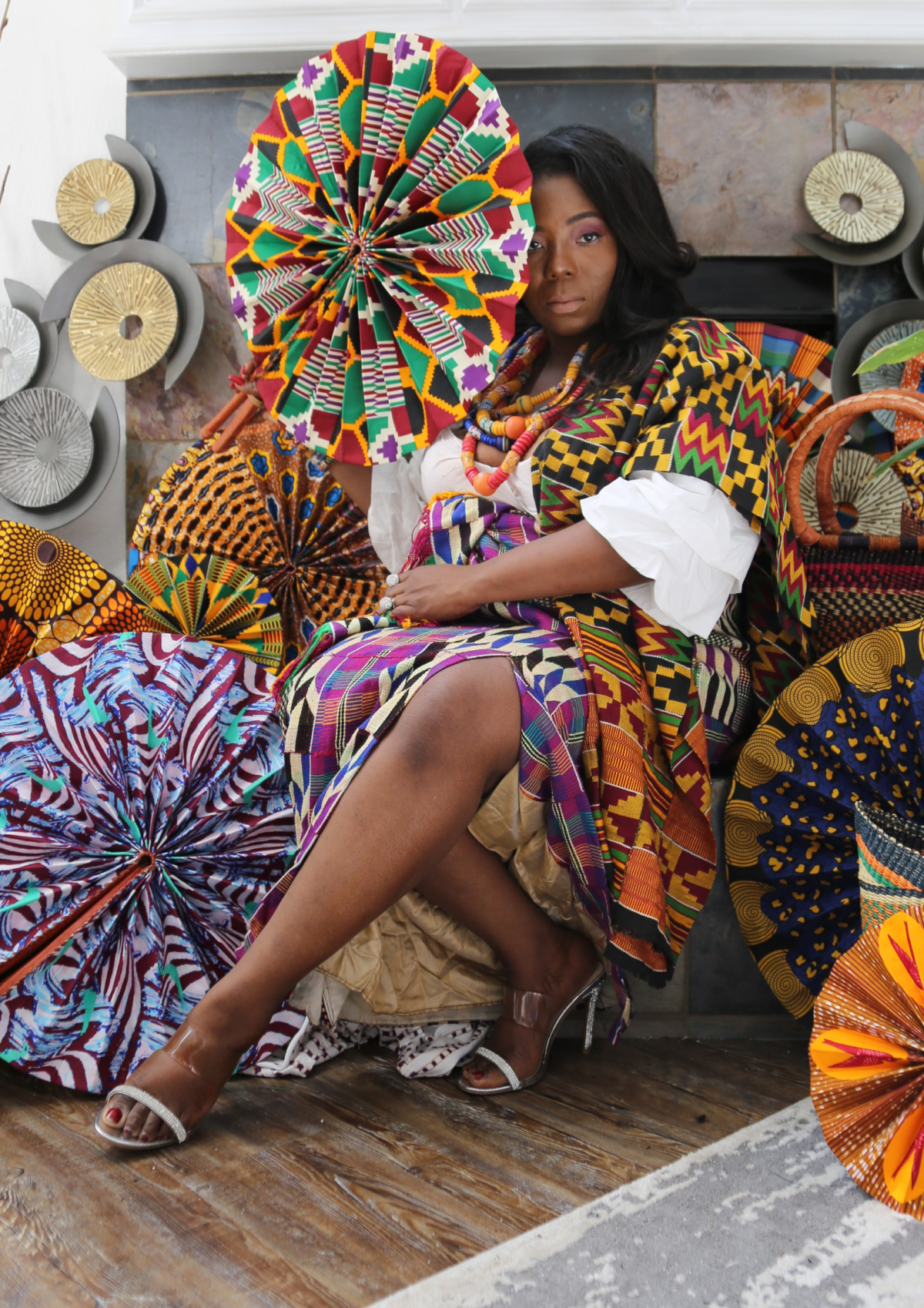 Growing up as a little girl in the Bronx, Ghanaian American Monica Tetteh understood the power and potential that a change of clothes could have. One of the 43-year-old Dallas event planner’s fondest memories came whenever the artist and her family returned to their home country of Ghana. Halfway through, usually just before a connecting flight from Amsterdam to Accra, the whole group changed into spectacular outfits.

It was in the 80’s and Madonna’s style was in vogue. In the airport bathroom, Tetteh and her sister donned the hot pink tulle skirts, matching gloves and white-collar tops that were all the rage. “We looked like we were going to a concert,” she laughs. She always remembered how those outfit changes made her feel.

The magician behind her family’s transformation was her mother, Vivian Monyo. She was the thread that connected many memories of Tetteh. Her mother always made something for someone: wedding dresses, Halloween costumes, or special occasion clothes for the locals. As talented as she was, she was determined that her children would never learn to sew.

When Tetteh saw her mother at her sewing machine, she would join her, cut patterns and cut out fabric, but her mother didn’t want her to learn the art of working with fabric. “It was always ‘Go to school. You’re going to be a nurse or this or that and not be fashionable.’ In their minds, working in fashion is not a career, it’s a job, ”she says.

As the oldest, she felt the need to follow her parents’ instructions and set a good example. Still, Tetteh’s K-12 art instructors encouraged her to continue studying art, and the budding artist continued to create fashion illustrations in her sketchbook. She never lost her passion for designing clothes. She sought solace in extracurricular activities like student government, where she learned that she had a talent for bringing people from all walks of life together to work toward a common goal. After graduating from college, Tetteh took what she knew about working with students and building a community and looked for ways to apply her drive for inclusion. When she got married and moved to Plano, Texas, not far from Dallas, Tetteh tried to find ways to connect with the community there.

Tetteh understood that there was a space that couldn’t be filled by companionship – she missed her mother. Monyo died in 2003 from brain cancer when Tetteh was 25 years old. “The day she passed away, I found out I was pregnant with my daughter,” she says. Looking for a way to feel connected to Monyo, she decided to get into sewing. She took beginner’s courses through the Plano American Sewing Guild. The first project was a pillowcase. Next, a clutch. The class’s final project was to make a personalized garment. Still attracted to tulle, she decided to make another skirt. Madonna from Tetteh’s days were far from her, so she made the new skirt in the style of Carrie Bradshaw from Sex and the city.

What she couldn’t learn in class, she learned on her own by watching hours on YouTube. Once she had learned the basics, she wanted to make friends who were interested in the same hobby. She insists that the Dallas fashion scene isn’t just about cowboy boots, 10 gallon hats and pageant dresses the area is known for. Tetteh’s YouTube show That’s Sew Monica highlights some of the city’s fabric shops and fashion figures. With the help of her Sewing Guild and the City of Dallas Parks and Recreation Department, she started Project Sew, a free monthly sewing group where people could connect and learn from each other. Residents could bring in the projects they were working on and talk about them with others.

Tetteh helps those who find themselves looking for something, be it education, fellowship or fellowship. “I’m really about community and bringing people together,” she says. She also hosts #SewYourView, an online community where the group chooses a design and each designer interprets the design differently, choosing different fabrics and embellishments. Along with three other co-founders, she started Sewrority, a clothing company that sells clothing intended to strengthen ties between sewers interested in pushing the boundaries. Many of Tetteh’s friends think tailoring is for old ladies, and this group wants to make sure the younger generations feel included and welcome.

“We just wanted to show the love we have for sewing and share that bond,” she says. “I’ve always said, ‘Sewing is the thread that brings us together. Regardless of race, religion or sexuality. We come together with this common thread. So let’s tie in with that. we will therefore be launching the men’s collection very soon. “

“Sewing is the thread that unites us. It doesn’t matter race, religion or sexuality. We come together with this common thread.”

Tetteh and his co-founders believe the maker industry could be more welcoming, especially to black creators. Over the past year, the country has become more aware of the systemic racism that affects many facets of the lives of black artists, but few of the brands she has frequented have taken a stand on the issue of equality. Tetteh and her friends noticed the lack of support from many of their chosen tailoring and craft brands on #blackouttuesday in response to the Black Lives Matter protests.

“With Mr. Floyd’s death last year… I was struck, along with several other manufacturers and artisans, by the deafening silence of the brands we work with. These are brands that we are ambassadors for and none of them. between them didn’t say anything, ”Tetteh said. “We were surprised. For example, you have black manufacturers. You made money with us. Are you going to say something – that you support us as a community and our calls for justice?”

To galvanize the momentum of the moment, Tetteh, along with several of her peers, gathered on Zoom to mourn, let off steam, and then figure out how to make a meaningful change. The result of this three-hour meeting was the Black Makers Matter platform, which uses the handle @blkmakersmatter on Instagram. During the week, they had 10,000 followers, and now the handful have over 39,000 people interested in learning more about the contributions of black manufacturers, including fiber artists, artisans, designers and dyers, past and present. In addition to showcasing black artisans, businesses and institutions, the account highlights artists who have passed away, such as Annie Lee, a well-known painter who has been acclaimed for her depictions of black life.

Tetteh insists there is more to the movement than just posting on social media: “It was great to have these honest and difficult conversations. Now it’s about holding people accountable and making sure it wasn’t a performance. Thursdays, and they don’t see the work we’re doing behind the scenes. We educate people about inclusion and equity. We meet brands and work to change the landscape for black designers, ”she says. Black craftspeople have noticed the lack of diversity in print and social media marketing campaigns and now the group regularly consults with craft companies to discuss how they can best implement inclusion in their content. Brand.

As the group celebrates its first anniversary, Black Makers Matter continues to spotlight creators on their Instagram account, and right now Tetteh and her co-organizers are focused on the future of the organization. There are plans for a Black Makers Camp for young people, and they are also working on the implementation of a scholarship program for this age group. Tetteh realizes that the group has work to do to ensure that the knowledge they possess is passed on to the next generation.

Downstairs in Plano, TX, the sewer is doing its part: After receiving several mom and me pajama outfits and a tailored skirt, Monica Tetteh’s 16-year-old daughter wants to learn how to sew. Eager to ensure that the memory of her mother Vivian Monyo is a part of family history, Tetteh intends to teach her daughter, nurture the interests of a new generation of black makers, and pursue the sewing heritage from his family.