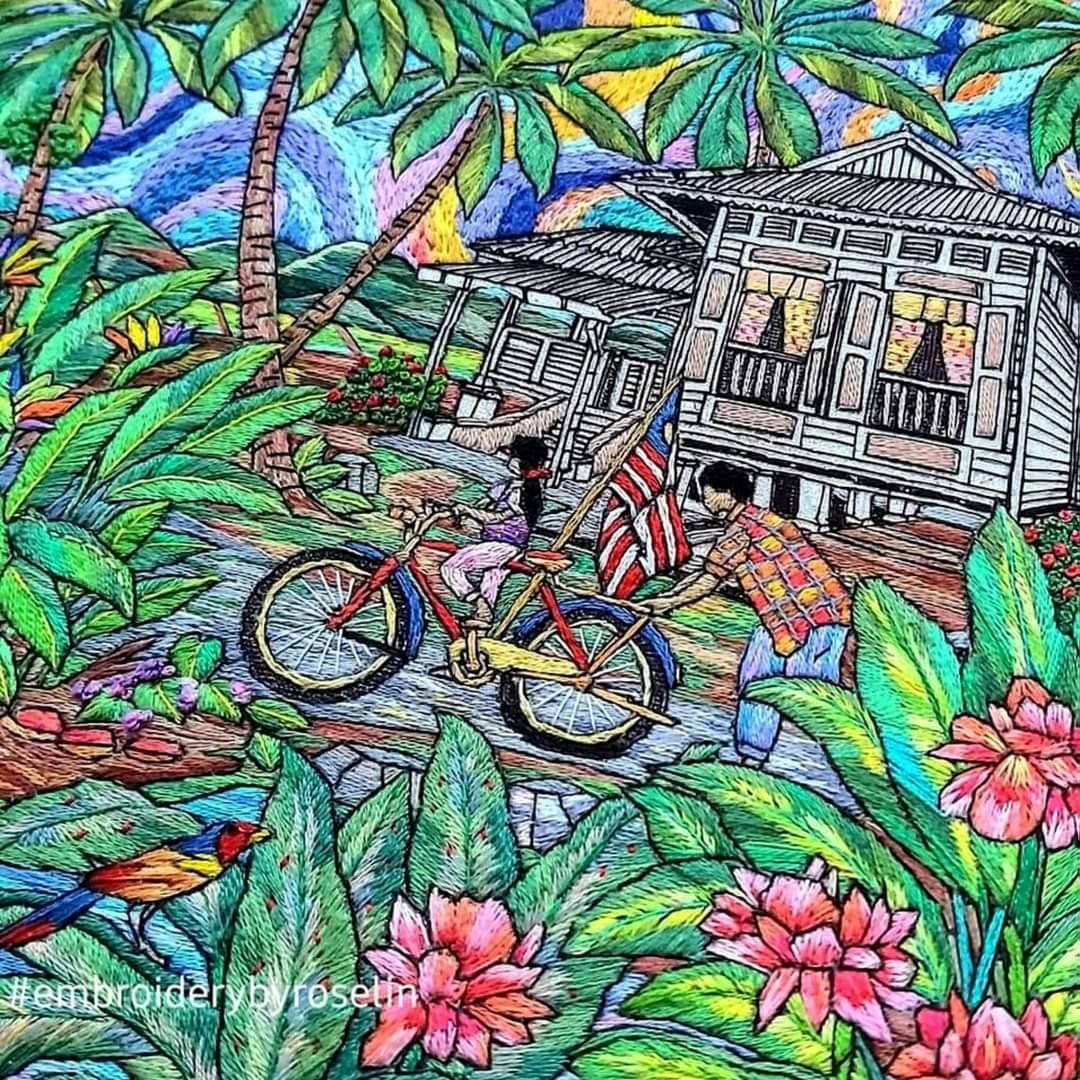 At a glance, his works resemble colorful oil paintings, but the sophistication of his craft shines through each carefully woven sheet of thread and shows his precision and creativity that results in embroidered paintings.

Having a background as a landscape architect also helped, given the way she wrote new work as she began to take her new hobby seriously. It all started after seeing the work of Jura Gric, an embroidery artist from Lithuania.

The first series of his works displays the concept of Nostalgia Kampong, followed by the second series Memori Sambutan Hari Raya Aidilfitri. His last series Nostalgia Kemerdekaan, which she completed this month, captures the essence of the country’s independence celebration.

“This work tells the story of nostalgia for piloting the Jalur Gemilang in conjunction with the National Day, which is a must-see event among Malaysians every time August arrives,” said Yuslinda, who is affectionately known as Roselin.

“For small dots, I have to use a magnifying glass. The type of fabric, the size of the needle and the thickness of the thread used also play an important role in producing a quality end product, ”says Yuslinda. Photo: Yuslinda Yusof

“Each work is drawn and embroidered with the greatest care so that the image of the spirit of patriotism can be translated. For example, the embroidered painting shows a family wearing the Jalur Gemilang on a bicycle, ”said Yuslinda, who is now a full-time housewife.

The mother of three said that while each work is different, the four elements or concepts that are always highlighted in her works are nostalgia, village, landscape and architecture.

“I have noticed that embroiderers in the country tend to look to traditional patterns such as floral, animal or human designs, as well as foreign landscapes, but for me Malaysia is unique.

“The panoramic views of the country cannot be found elsewhere. This is why the elements I apply in my works remind us of the origins of our beloved country, ”said Yuslinda, who often features the traditional architecture of Malay houses, rice fields, streams, ginger flowers. and coconut palms in his works.

Each of Yuslinda’s works, born from imagination or photos, will be roughly sketched on the surface of a Calico-like fabric using an easy-to-wash pen before embroidering.

To bring her embroidery designs to life, Yuslinda uses a combination of various sewing techniques including long and short stitches, French knot stitch, seed stitch and back stitch to achieve a fine or thick embroidery texture.

“For small dots, I have to use a magnifying glass. The type of fabric, the size of the needle and the thickness of the thread used also play an important role in producing a quality end product, ”said Yuslinda, who has a small studio in her home in Shah Alam. .

Yuslinda said some of her artwork sold for between RM1250 and RM3,000 because it was 100% handmade without using an embroidery machine.

“A single piece of art can take weeks or months depending on the type of skills, drawing and sewing used,” said Kuala Pilah, from Negri Sembilan. – Bernama

In quarantine on vacation. Nothing like safe travel with children during a pandemic